Introduction to the foundation

What does the foundation Groningen-Jabalya want to achieve?

The foundations aim is to establish various contacts between citizens and organizations from Groningen as well as Jabalya and to inform citizens in Groningen about the daily life in Jabalya. With this objective we do not make things easy for ourselves, because exchange and contact with people in the Gaza Strip is very difficult due to the ongoing blockade. A consequence of all the events that took place in Gaza since Hamas won the 2006 Palestinian elections. In reaction Israel, with the consent of the US and Europe, declared a total blockade of Gaza that is still going on after more than a decade.

Since our visit to Gaza in 2005, it was therefore no longer possible to make a second visit. All the contacts we had built there were lost. But since 2011 the contacts have been restored both with the municipal authorities and with the current tenants of the building that was financed at the time by the municipality of Groningen. It was originally intended te be a youth center, but that did not go through; the building is now used by a school, the Nama’a College for Science and Technology. The municipality of Groningen has made money available to finance scholarships for poor students. This allowed twenty students to follow a course.

We also made contact with Theatre Day Productions, a youth theatre company that provided performances for about 120,000 young people in Gaza in 2015. Perhaps this theatre company will in the future be able to use the theatre hall in the building of the Nama’a College. In the field of sport, there may also be opportunities to exchange people and experiences.

Through the newsletter, the website, lectures, informative meetings and film screenings, we continue to inform citizens of Groningen about the most urgent needs of the population in daily life of the people of Jabalya and Palestine in general, the peace initiatives, and the obstacles to development in the Gaza Strip and Palestine as a whole.

As in previous years, the foundation cooperates with other organizations in the Netherlands such as Gate 48, A Different Jewish Voice, Palestine Link, Groninger Forum and local student organizations. 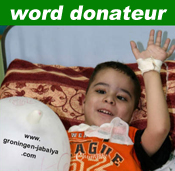